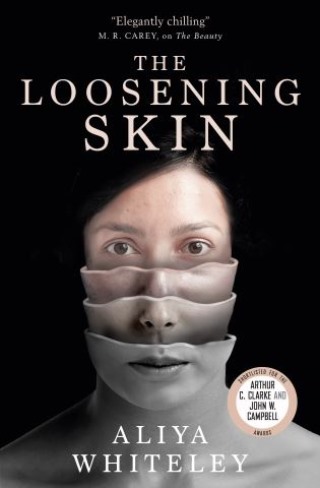 Shortlisted for the Arthur C. Clarke Award, John W. Campbell Award, British Fantasy Awards and the Brave New Words Award.
A gripping and strange story of shedding skins, love and moving on from the award-winning author of The Beauty. Includes an exclusive short story set in the world of The Loosening Skin.

Rose Allington is a bodyguard for celebrities, and she suffers from a rare disease. Her moults come quickly, changing everything about her life, who she is, who she loves, who she trusts.

In a world where people shed their skin, it's a fact of life that we move on and cast off the attachments of our old life. But those memories of love can be touched - and bought - if you know the right people.

Rose's former client, superstar actor Max Black, is hooked on Suscutin, a new wonderdrug that prevents the moult. Max knows his skins are priceless, and moulting could cost him his career.

When one of his skins is stolen, and the theft is an inside job, Max needs the best who ever worked for him - even if she's not the same person.

Includes an exclusive short story set in the world of The Loosening Skin.

Aliya Whiteley: Aliya Whiteley writes novels, short stories and non-fiction and has been published in The Guardian, Interzone, Black Static, Strange Horizons, and anthologies such as Fox Spirit's European Monsters. She has been nominated for the Pushcart Prize twice, and won the Drabblecast People's Choice Award in 2007. Her writing is often violent, tender, terrifying and funny. It has garnered much critical praise and provoked discussion.